We are the Champions! SDS wins Korean Nationals Championship 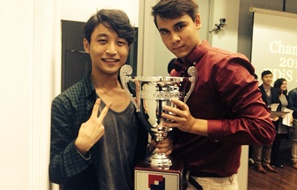 The SolBridge Debate Society (SDS) is now the reigning champions of Korea, after winning the 15th KIDA National Championships (KNC), held at Ewha Womans University in Seoul in early November.

This was the school’s first national championship and the first time a university outside of Seoul has ever taken the trophy. After falling just one step short at the last KNC as runner-ups to Hanyang University, SDS has successfully taken that final step to become champions.

The competition was held in the British Parliamentary debating style, which features four teams competing against each other per round, with each team receiving a ranking corresponding to a certain number of points being won per round (1st = 3 points, 2nd = 2 points, 3rd = 1 point, 4th = 0 points) and each speaker receiving a score between 65-85. At the end of the preliminary rounds, the points are tallied to determine the top 16 ranking teams, which would move on to compete in the break rounds, with separate breaks being available for EFL and rookie teams.

The SolBridge Debate Society had a great start on the first night of the championship with five of our teams receiving 1st or 2nd place in Round 1 (with two other teams receiving 3rd). Although SolBridge’s teams went through some ups and downs, the teams’ success continued into Saturday, which featured four additional preliminary rounds. SDS dominated the break announcement—with a whopping four teams named in the main break, and one being named to the rookie break. SDS 1 was the 4th ranked team at the break, with SDS 2 at 10th, SDS 3 at 13th, and SDS 4 being named as a reserve breaking team. SDS 7, our rookie team, was the 2nd ranked rookie team at the tournament. While this result was amazing on its own, SDS 5 and SDS 6 were remarkably close to breaking as well, with SDS 6 having the same number of team points as the last breaking team, missing out because of lower individual speaker points (rankings are determined first by team points won in rounds, followed by how many individual speaker points each person receive).

In the elimination rounds, SDS 7 performed very well, competing against the best rookie teams in the Rookie Grand Final before yielding the title to a team from Korea University.

Arguing against the motion "This House believes that university students should not participate in political demonstrations", SolBridge’s SDS 1 put up excellent arguments regarding why university students are both qualified to make political expressions and are the right actors to be at the forefront of political change. At the conclusion of an extremely high quality round and a lengthy discussion among the 9-member judging panel, SDS 1 was crowned the new champions of Korea debate, holding off a fierce charge from Ewha in a 6-3 decision.

In addition, the teammates of SDS 1 capped off this win by also taking home individual honors, tying for the 3rd best speaker award.

Not only is this SolBridge’s first (hopefully of many) championship at Nationals, it is the first time the trophy has been won by a university outside of Seoul. This triumph is undoubtedly the result of the institutional support that SolBridge provides to its students, allowing them to both succeed and fail, and ultimately learn and grow, via various international training and competitive events. By having the most number of teams to break along with the championship and individual speaker awards (not to mention judging accomplishments, including having a member in the Chief Adjudication Core), it can be said that SolBridge is currently the top debating institution in Korea.

While that status may change with the next Nationals, it is a remarkable achievement for a school and debate society that is so young to have attained the undisputed top status among Korean universities for debating supremacy.

Congratulations to the new champions, as well as all of the members who all played a huge role in making the SolBridge brand name shine at the national level.

Back
Previous Graduation Evening Fall 2014 by Student Council Next Our Diversity Makes Us One: Culture Day 2014