Rising to the Occasion Again and Again 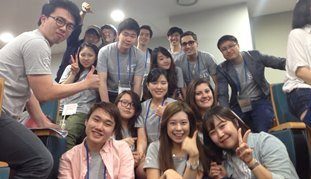 The SolBridge Debate Society continues to rise to the occasion.  During the first week of May, 12 SolBridge students participated in the 17th Korean KIDA National Championship (KNC), the largest and most prestigious debate tournament for university students in Korea. This year's KNC, hosted by Sungkyunkwan University in Seoul, featured 60 of the top teams from all over Korea, and as is the tradition for spring KNC's, it was held in the Asian Parliamentary three-on-three debating format.

SolBridge sent 12 students as debaters and four students as judges. Our student participants were as follows:

Our teams kicked off the KNC in a historically successful start, as all four teams won their Round 1 matches. SDS teams could not maintain that success for Rounds 2-5 on the second day, the teams fared quite well, with SDS 2 and SDS 4 notching another win each and coming close to winning in other rounds, and SDS 3 taking two more wins to finish with a 3-2 record, coming just short of breaking into the Octofinals. SDS 1, going in as one of four heavyweight teams favored to win the tournament (the others being two teams from Korea University and one team from Ewha Womans University), performed up to expectations, winning four out of five rounds and breaking as the #2 ranked team overall. Even the lone blemish on their preliminary round resume was controversial, as two less experienced judges had overruled a Deputy Chief Adjudicator (who thought it was a clear win for us) in the room to award the opposing team the win. This marked the highest break for SDS ever in our history of participation in KNC, with only the undefeated team from Hanyang University ranking above us.

In the elimination rounds featuring the top 16 teams, SDS 1 played its role of "spoiler" to perfection, with dominating wins over three teams from defending champions Seoul National University (SNU) in the Octofinal (2-1), Quarterfinal (3-0), and Semifinal (4-1). In doing so, SDS single-handedly ended SNU's historic performance of breaking three teams among the top 16 as well as ending SNU's hopes to defend their championship from last year. Their win in the Semifinal was especially impressive, as the opposing team featured two former high school national champions, with one of the speakers being a former Korean National Team member who received the EFL 3rd Best Speaker award at the World Schools Debating Championship.

In the Grand Final, SDS 1 faced the surprise team of the tournament from Hanyang University, which went undefeated through the preliminary rounds. After 30 minutes to prepare, the two teams held a spirited debate, with our team pushing a counter-intuitive and unpopular case that argued that we could protect North Korean defectors better if we did not claim them to be Korean citizens and that we should not seek reunification. Following a debate that saw tremendous swings in momentum and audience reaction, SDS 1 fell just short of the championship in a 5-2 decision.

Members of SDS 1 also received remarkable individual honors as the only team to place all three speakers in the Top 10 Speaker Awards. Harah Jeon and Hyun-soo Shin tied for 7th best speakers while Jae-dong Jeong came in as the 2nd best speaker in the tournament.

The SolBridge Debate Society has come a long way in its relatively short history, and is unquestionably one of the most respected and feared teams in the national and regional circuits. This semester's team has nudged the bar even higher by becoming #2 out of 60 teams in Korea. Everyone at SolBridge looks forward to them taking that final step to the top in the near future.