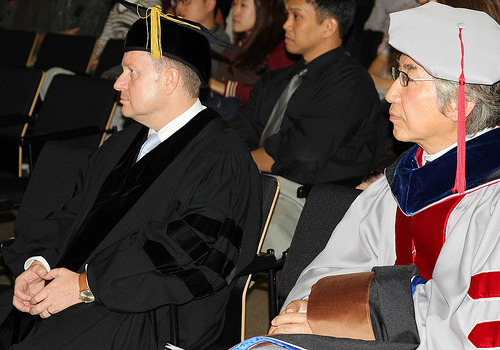 One of the most cherished traditions of academia is the conferring of an honorary degree to an individual who has made significant contributions to the advancement of civilization and humankind. Students and faculty at SolBridge were witness to this special event when the Honorable Werner Amon, a member of the Austrian National Parliament was was conferred with an Honorary Doctoral Degree of Business in a special ceremony in the fourth floor auditorium.

In his introduction, Dr. John Endicott, praised Amon for his accomplishments, not only as member of the Austrian National Parliament, but those accomplishments which brought him to Korea.

“Of special interest to this audience was not only Representative Amon’s deep interest in education, but his long-time willingness to assume the responsibility as President of the Austrian-Korean society,” Dr. Endicott said, “as well as President of the Austrian-Korean Parliamentary Friendship Group—activities of which brings him to Korea for these precious few days in October.”

In his special lecture following the conferral of the honorary degree, Amon expressed how humble he was to have received such an honor and talked about the long relationship which Austria and Korea have shared—a relationship which started 120 years ago when the two countries signed a trade agreement. There was also another side to this long relationship: former South Korean President Syngman Rhee’s wife, Francesca Maria Barbara Donner, was Austrian.

“There are certain values we all share including our love for music,” Amon said grinning as he referred to classical music as well as the popularity of “Gangnam Style” in Austria.

And in keeping with the spirit of the ceremony, Amon encouraged students to strive to do their best.

“I appeal to young people to take all the chances you have to educate yourself,” he said.

Back
Previous How to Stay Competitive in Today’s Complex World Next SolBridge, Meiji University Sign MOU